In a major revelation, PDP chief Mehbooba Mufti today said that a major reason to break the alliance with BJP was she didn’t accept the pact that entailed the bodies of slain militants won’t be handed over to their families for last rites and a major crackdown would be launched on Jamaat-e-Islami in J&K.

The PDP chief also said that closing doors for the All Parties Delegation (APD) by the Hurriyat leaders set a bad precedent across India and that PDP will continue to vouch for the resolution of Kashmir issue through dialogue between India and Pakistan.

Addressing the party workers and DDC election winners at PDP headquarters in Srinagar, the PDP chief said that late Mufti Muhammad Sayeed had joined hands with BJP only to “cage a jin” in a bottle so that article 370 won’t be touched. “It was after an agreement between PDP and BJP that article 370 won’t be touched, historic roads will be opened and a dialogue with Hurriyat leaders and Pakistan would be held. That was the Agenda of Alliance,” she said . However, Mehbooba said that the alliance crumbled after she was told by the BJP to sign a pact that read: “militant bodies of (locals, foreigners) won’t be handed over to their families for last rites and a crackdown will be launched on the JeI across Kashmir.”

“I refused to agree to this plan which led to the fall of PDP-BJP alliance in J&K,” she revealed. She said that while PDP was in alliance with the BJP, a golden opportunity was lost when Hurriyat leaders shut their doors for the APD delegations. “This set a bad precedent about Kashmiris across India,” she said, adding that after that another opportunity was lost by not responding to the repeated offers of Home Minister of India who stated “My doors are open for everyone.”

The PDP chief while felicitating the DDC candidates who won from various seats across Kashmir, stating that “BJP had written PDP’s obituary” but the recent council elections proved that PDP is workers’ party rather a movement on ground. “I recall what my father used to say about workers. He would always say workers are like his eyes. I believe in same. Today, PDP is alive yet again and that is because of workers. This happened despite the fact big leaders left our party but they lost in their own constituencies as our worker stood with us firmly,” she said.

The PDP chief while training her guns at BJP led government in New Delhi said that history is witness whenever any party comes to power, it invites other smaller parties to join them to run the governance but “We are seeing reverse of everything.” “BJP made country’s top agencies as its partners including NIA, ED, CBI only suppress people and intimidate them,” she alleged.

She said that in the past two months, there is hardly any worker who wasn’t intimidated, threatened, warned and now “DDC winners are being blackmailed to join other parties.” “A person who was caught along with three guns in his car was let go and his case was withdrawn as he became BJP’s proxy,” said Mehbooba, adding that on the contrary PDP youth leader Waheed Para, who made hundreds of youth join PDP was put behind the bars by NIA. “Waheed is the same youth who brought 6000 youth to former Home Minister of India’s rally in Kashmir. Despite court orders, he wasn’t allowed to take oath in jail. How can he be linked with militants as he was working bring youth towards mainstream?”

The PDP chief said that PDP will continue to press for resolution of Kashmir issue through dialogue with Hurriyat and Pakistan. “We are not saying we will resolve the Kashmir issue, but we have a role. We will not allow Kashmir to be a battle ground but a bridge of peace between India and Pakistan. We are not saying anything new but what Atal Bihari Vajpayee did. We demand opening of our traditional routes too,” she said as per KNO

Accusing BJP led regime of choking Kashmir’s economy and tarnishing the J&K’s constitution by scrapping article 370, Mehbooba said: “We will fight for our rights. We are not the ones who would raise white flags. No matter how far BJP goes in choking Kashmir economy and making us dependent on all fronts, we will not bow.”—(KNO) 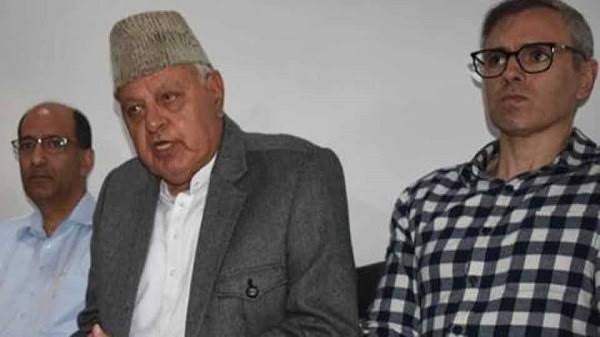